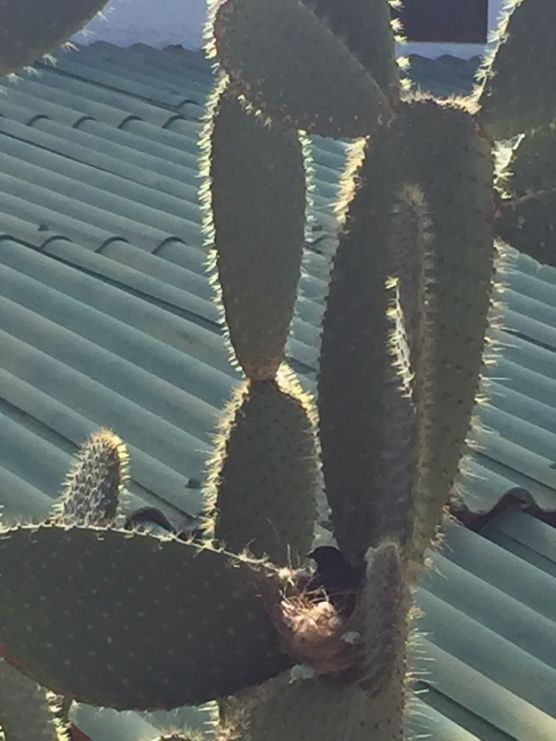 Half my lifetime ago, we had an Amway business, of all things. That’s when I first narrowed in on the Galapagos Islands as my dream destination. Thirty years later, I cashed in under the guise of studying Spanish. In my mind, these mythic isles off the coast of Ecuador had become much more than, and unlike, any place I’d ever known. I expected to find surreal shining wilderness gems in the middle of the Pacific.

Instead, the 2019 Galapagos are more like islands anywhere:  tourist playgrounds that have trees, plants, coast-lines, sun and surf. Thirty-thousand people make their homes in the archipelago, as well as many more animals.

The grand and obvious difference between these islands and others is that all creatures live side-by-side, relatively respectfully of one another. This subtle reality grew on me over the short week I was there. I cannot over-emphasize the sense of hope this has instilled in me.

To illustrate, the morning before I left my hotel on Santa Cruz Island to head back to my country, I was perched outside my second floor room journaling. I glanced over at the tall cactus, about three meters in front of me, and noticed a pair of endemic Darwin finches perched in a crotch.

“Nice photo,” I thought, as the non-descript grayish female flew away.

Then before my eyes, a simple-looking small black bird—the male—began building a nest for his family. Over and over again, he swept in with tiny branches and puffs of white fluff. He painstakingly arranged a home out of air and natural materials. I was captivated.

I was also thrilled the next morning that his work continued. Now there was an impressive screen and a slight depth to the construction. Progress had been made. As I watched, and in front of God’s eyes (and mine too), the heretofore silent bird began singing, seemingly a tune of joy and pride. Perhaps the work was almost done. I realized soon enough that he was calling his woman home, because she appeared nearby and flew in, presumably to inspect.

I was doing what scientists do—watching for long, still moments, then recording, one moment after another. Meditators do this too. Quietly. In stillness. Unable to do anything else at all…except to breathe…and marvel.

As I leaned in and watched the finches that morning, I began hearing my man calling me home too. Over the continents and thousands of miles, I listened. With fond anticipation, I began the two days and ten legs of required traveling—taxis, ferries, flights, buses—to arrive safely back into his open arms in the nest we built together and call home.

Now, back in Seattle, my rekindled anticipation extends back to that other pair of love birds. Their little puffs of yellow baby birds—“amarillos” as Gloria, the hotel’s housekeeper called them—will arrive soon enough. I have a dream that the next inhabitant of my hotel room will enjoy them as much as I delighted in their parents. I imagine and hope and wait for this type of peaceful reality every day.