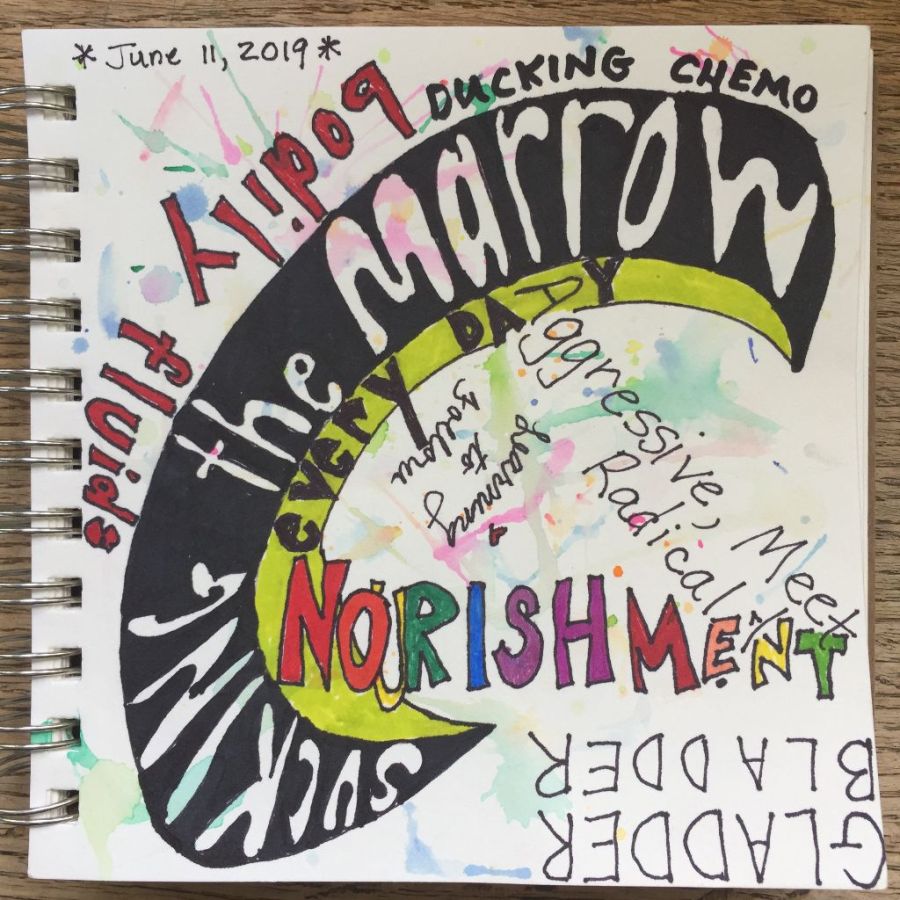 On May 24th, we learned that Rob has bladder cancer. Ohmygod, do I ever wish we could just fricking ignore that damn diagnosis. After all, they scraped away lots of the derelict cells in order to complete the pathology report, so now three weeks later, Rob feels well again. He’s jogging and planting flowers. Last night we overheard a little girl exclaim as she walked by our house, “This house gardens good. I like it. It’s beautiful!” Me too. I especially like the gardener himself. He’s flat-gorgeous and he seems well here-and-now. What a nice honeymoon stretch for us. Why can’t we simply continue loving each other this way?

Because we know better. He has precariously-situated high-grade tumors in his bladder. They have at least penetrated the second layer, the lamina propria. When one hears “mucosa” associated with their bladder cancer—after hours of research at least—they heave a sigh of relief. We certainly have. There’s no firm indication that the cancer has reached the muscular layer. And there are no “mets” (shorthand for metastases, who knew?) that we know of. But the possibility looms…

You do not belong here. It’s time to get after this c-devil! Enough research, for heaven’s sake. Rob has decided. Thank God. I agree whole-heartedly. Thank God.

But first the steps: Besides the research, it’s been helpful to talk directly with others and their loved ones who have survived bladder cancer. Their candor is a gift beyond description. Then we met with another urologist for a second opinion.

While Rob is the scientist between us and has learned bucket loads about our urinary tracks in a few short weeks, Intuitive Me has watched for confirmation. When Rob met (spoiler alert) his surgeon—the experienced doctor who performs one percent of bladder surgeries in the US each year,–one of the first things he said to me after the appointment was, “Dan would like that guy.” Ok, this is a longer story, suffice it to say (whether Rob would admit it or not), he goes to older brother/cardiac surgeon/dead-almost-30-years-now Dan, for advice. For me this statement is right up there with, “Hey, I plan to live 20 more years, like my parents did. Seems like this is the best way to do that with the least amount of overall pain.”

My Brave Rob Reid has decided to have his bladder removed. Another confirmation of this decision came when I was waiting impatiently, but bless-pat silently for a change, on the porch while he was inside wading through a long series of phone calls to schedule the operation. He broke into my wild reverie with two words, “July 19th,” and I felt a wash, like warm wine, flood my body. This would be O-Day for us. The operation is scheduled. Even now, it is hard for me to imagine women who suffer through their husbands’ heart attacks with no warning, then wait through a day-long operation before settling back into life with their repaired half. THAT really takes my breath away! I feel phenomenally grateful that we have this time to prepare, especially while he feels relatively well.

People have asked, “Really, they can take out his bladder, give him a new one and he’ll be ‘good-to-go’ so to speak?” (Ar, ar, ar)

Here’s my current answer to that: “Yes, you can live without your bladder. Check out the internet where you’ll find all the options. Personally, I think your question is a bit like asking a woman flat out if she’s had a hysterectomy or a man if he’s circumcised or not. Or maybe like asking them to explain their particular bathroom habits.”

You can ask Rob for those details if you really want to know. He’s more analytical about the whole thing anyway and ready to explain until your eyes glaze over.

Basically, he’s choosing the best way to save his life rather than only his bladder. Whether his gladder bladder is inside or outside, made of his small intestines or of plastic, connected to the outside through his penis or a rosette (how’s that nickname for a stoma?; that would tempt a gardener, I bet….a religious person like me too) near his belly button.

We’re talking Life here, people. Does it really matter what the final apparatus is after suffering through eight hours of major surgery, seven days in the hospital (Overlake for local readers) plus six weeks of recovery at home?

Hey, he even has a good chance to duck classic cancer chemotherapy this way. And run again every other day for many years, like he’s done for the forty years I’ve known him. After all, this is one cancer the medical community calls “curative” (whatever that means…looks like we’ll find out).

So that’s how Mister Courageous (with his Chief Caregiver) is choosing to face this hiccup…ok ok, we’ll give this one major burp status. What they call “aggressive” cancer deserves what they call a “radical” cystectomy.