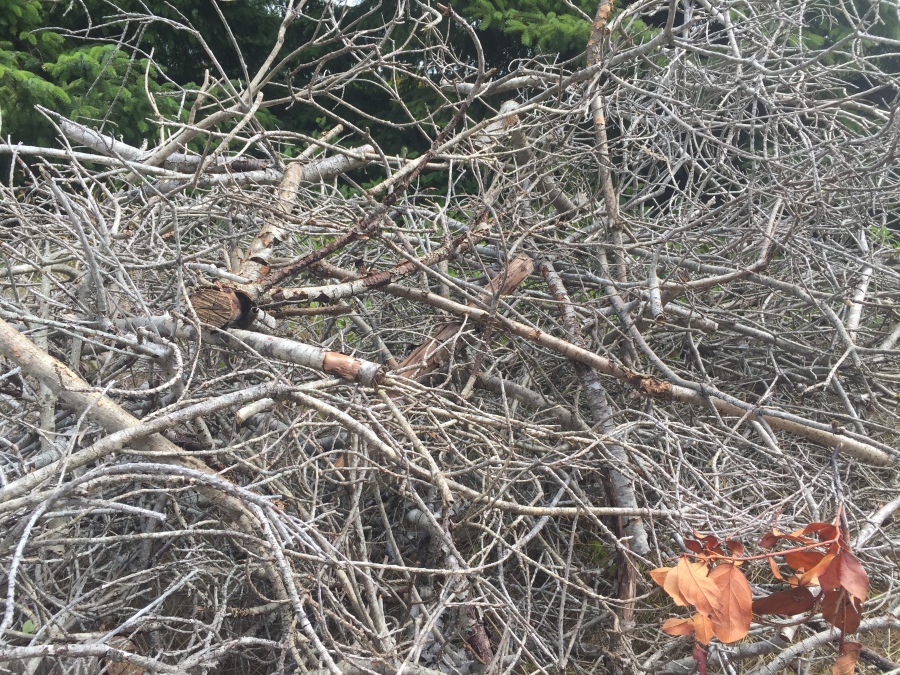 The other day I spent some time with my dad. Who says he’s dead and gone?

When I was a kid we reserved two weeks in August for family vacation—tent camping in one of Virginia’s state parts. I remember my father’s delight whenever we snagged a waterside campsite. Next the routines ensued so we could settle in for the break between his jobs at church camp and elementary school. As the oldest I was expected to lead the search for firewood while he erected the tent and Mom set up the kitchen. At some point when most of the work was done, there was the directive, “Hang up the hammocks, girls. But first, let’s go swimming!”

One day recently while we were at the beach cabin, I dragged the pruned branches from atop the salal bushes where we’d laid them to dry years ago. Methodically, one trip after another, I piled the fire circle high and then created a chaotic bundle off to the side. Fairly early in the task, Dad came to mind. He was overjoyed with our waterside spot and tons of tinder. Even though there was a burn ban, we imagined a bonfire later as well as indoor blazes to come while we wait out those inevitable and powerful winter storms beside the Pacific Ocean. On this balmy late summer afternoon though, Dad was happy to help me gather and prepare.

I’d learned to summon my dad soon after his death, as we say, “by accident.” On the Thursday of Holy Week three years ago, my father’s ashes arrived unexpectedly on our doorstop in Seattle. The tag “Human Remains” was a dead give-away, so to speak. We thought these last physical remnants were going to be delivered to Mom’s address but in hindsight the receipt and timing couldn’t have been better. It took a while to become comfortable with this version of his presence. Certain weekend events helped.

On Good Friday I was asked to stand in as a reader during the Easter Vigil necessitating my attendance at the rehearsal on Saturday morning. I contacted Priest Nancee and asked if she could possibly meet me after the rehearsal to bless my father’s ashes. This was the beginning of a wild ashes ride—a story for another time. It all started with Nancee’s response to my desire to have Dad with me at the vigil, “Why don’t you tuck the box under this plant here in the chapel? Then you can retrieve it after all the lights come on again and before you head home.” We decided instead that I would nonchalantly carry the ashes in a shoulder bag throughout the service including when I went forward to the large wooden chair in the center of everything to read the story of Noah and his family from the Bible.

I’m convinced Dad loved that solution too. It was easy to conjure him up and then to just be there, relaxed and enjoying story-telling together. I have had similar experiences with his mother Nannie. She was the only person I know who could scratch my back until I fell asleep, during life and after her death too. Now that I think of it, I’ve known about others too—at precisely the time they are hurt or the time they die. In those cases though I haven’t developed my intuition enough (yet) to know the details, for instance, “Who’s hurting?” and/or exactly “What happened?” But when this strong whiff of someone–usually a dead someone–shows up, I am learning to live with it and to find and provide comfort.

My favorite times are when the saints gather. Usually it helps to be absorbed in sacred ritual, like during the Eucharist at the cathedral or in my living room. At times like these it occurs to me that the barrier is thin, so I slit my eyes and begin to see them on the edges of the room forming a giant circle around us. I remind myself of the last scene in the movie “Braveheart” when Mel Gibson is about to be beheaded. He looks out into the crowd and begins to see the dead show up among the living.

Ok, ok, it’s woo-woo maybe. But when the beauty of nature surrounds me and I begin doing something over and over again consciously, I am performing a ritual that invites passage. Maybe I notice my breath and borrow God’s name—the sound of divine breathing to pace my own, “In-out, in-out, Yah-weh, Yah-weh.” And then it occurs to me how much my father likes this kind of thing. Of course he comes alongside. Why would I ignore this or consider myself crazy in these moments? Instead I ease in, balance myself and gladly accept his assistance.